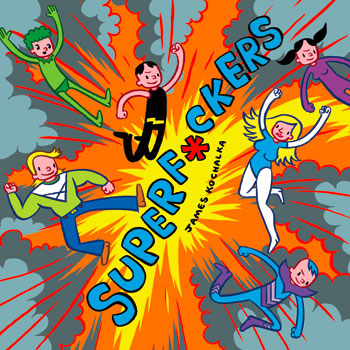 From the printers of Top Shelf Productions and the field behind the author’s house in Vermont comes Superf*ckers, a compilation of the the craziest superhero parody you will ever read, all in inimitable Kochalka Quality.

James Kochalka, author of American Elf and frontman for the band James Kochalka Superstar, is the mastermind behind this expletive-laden gallery of gross-out humor, which boasts bright, attractive colors, inter-dimensional shower peeping and getting high off of unorthodox chemicals. Oh, and there’s a story in there somewhere, too, but who has time for a story when you’re so busy laughing at a dysfunctional team of superheroes verbally degrading each other?

While Kochalka has produced kid-friendly works, this definitely isn’t one of them; the language alone should inspire any sensible parent to keep this out of the reach of children, but if it doesn’t, the nudity (which includes male genitals on full display), sex and copious amounts of blood and vomit ought to do the trick. Jack Krak’s distressed cry of “DONKEY ANUS!” is probably the tamest thing in here.

So, there’s this vortex in a glass container and some weird creature with a Shakespearean dialect who wishes to steal it. And there’s this kid with gloves that allow him to savagely beat the tar out of anyone, and he wants so badly to be on the Superf*ckers’ team that he’ll happily clean their toilet. And there’s a blob named Grotus whose slime trails apparently function as a stimulant when licked, and — hey, where are you going? Come back! There’s more!

Okay, for those of you who chose to stay, I recommend this book. Why? Because where else are you going to find a book with a superhero team so childish and abusive that they’re willing to kill one another over the group rulebook? If nothing else, you can laugh with relief at the realization you’ll never need to be saved by any one of these guys; Princess Sunshine has to brush her hair a thousand times just to charge her power, and in the meantime she counts each stroke out loud to the great distress of Grotessa, who is more interested in a relationship with Vortex than, y’know, saving the world.

The abundant profanity and chaotic storytelling are almost in the style and manner of a child, which adds an oddly endearing quality to it. It’s hard to be offended by something so carefree and silly. It reminds one of how a kid learns a new “forbidden word” and goes around using it at every given opportunity (read that: all the time). Now imagine that same kid learning a bunch of such new words, along with details about sex, drugs and homosexuality all at the same time and going off to draw comics about all this edgy stuff he’s just learned. The result is something that’s too whimsical and juvenile to be edgy, but any kid caught saying half the things these characters say had better be ready for a bar of soap to the mouth.

Kochalka provides it all in his distinctive visual style, with dialogue written in various colors and the occasional photograph serving as a background. Panels might get so small that they feature little more than a character’s head and maybe an arm, yet they never feel crowded or crammed. The art is loose and rubbery and has such an animated flair that you can just see the characters moving. The book format, a comfortable nine-and-a-half by nine-and-a-half square, reminds one of Matt Groening‘s classic Life In Hell books. The art and language aren’t too far off that mark either, come to think of it.

Superf*ckers (ISBN 978-1-60309-052-0), retails for $14.95 and can be found on Amazon, Barnes & Noble or wherever books are sold. Add it to your library for whenever you need a good laugh. Even better, get another one as a gift, and watch the look on the recipient’s face. Try to tell me it wouldn’t be worth it.