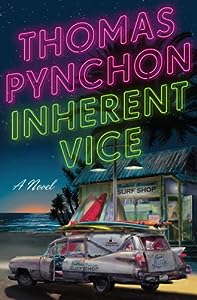 When I was first deciding that I was going to check out Thomas Pynchon, a lot of folks pointed me to his shortest novel, The Crying of Lot 49

. I need to re-read it, but at the time, it didn’t really click. At the time, I said something along the lines of “I see the influence on a lot of stuff I read that came later, but I tend to think they did it better.”

Luckily, I came around on Pynchon when I read Gravity’s Rainbow, for which I’m really grateful — and that’s why I want to go back to Crying. A lot of it DOES stick with me — Oedipa Maas and her DJ husband “Mucho” on KCUF, Thurn & Taxis (and my surprise to find that was real, or at least based on truth), Metzger, The Paranoids — but as a whole it didn’t quite seem to jell.

Luckily, while Crying is still Pynchon’s shortest novel, Inherent Vice is Pynchon’s most accessible. I’d heard that Pynchon was actually trying for a “beach read” type novel, and, well, he succeeded — or, at least to the point where Pynchon CAN write a “beach read”. It’s still complex with a ton of characters and asides and pop culture references and pretty much verything that makes it a Pynchonian Stew, but it’s not quite as… much so. If that makes sense.

Inherent Vice reads as a light Private Detective type of novel, and when the paperback comes out, I hope it’s in the mass-market size — but I don’t think most of those have references to Lemuria, the Bonzo Dog Band, or which label released the single of the Surfaris’ “Wipeout” that had the laugh, Dot or Decca. (I’m pretty sure it’s Dot.) But like a lot of Pynchon, it’s hilarious in parts, and there’s a lot to chew on, even for something as breezy as it is.

Unlike Gravity’s Rainbow where there’s a lot going on and it’s hard to keep everything straight, Inherent Vice is relatively straight-forward — but it’ll encourage re-reads, I can tell, even though I’ve currently only read it once through. And, I love that, like Psycho, the story it ends up being isn’t what you think it’s going to be from the first couple chapters. And, honestly, it’s a bit sweeter than you’d expect as well.

Pynchon’s gift for character comes through; all the characters are likeable to some extent. Even the bad guys are charismatic — you might not want to hang out with Adrian Prussia, say, but he’s got a definite je nais se quoi. Bigfoot may be a fascist, but he’s charming enough to make you question and keep you wondering if he actually IS one. Doc Sportello, the center of the novel, is a fun, charming goofball, even when you discover the kinda creepy and unsettling source of his nickname.

Inherent Vice is only about 360 pages, and while there’s nothing else really to say at the end — you wish it goes longer. It’s not as completely-mind-taking-over as, say, Infinite Jest

(I had no dreams about Sportello or his friends), but you still want to spend more time with them. But the story itself is important too — it’s not just a character study, and Pynchon keeps you guessing. If the whole beloved postmodernist author thing doesn’t work out for him, he could probably do all right with the genre fiction. In a way, I wouldn’t be heartbroken if we do get a pile of Sportello Adventures… even though it’d be sad if it made it so Pynchon didn’t explore other worlds as well. But, regardless, I’m not holding my breath; I don’t think Sportello’s another Pig Bodine, but, well, who knows — he could be. And from his voice on The Simpsons

, Pynchon sounds like he’s got quite a few more books in him, so, hey… there’s always a chance.