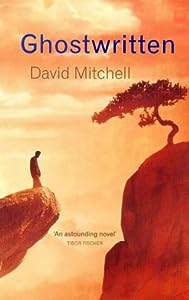 After reading David Mitchell‘s Cloud Atlas, I knew that I had to read his other books. So, I went back to the beginning. (Honestly, I don’t think I planned it that way, it was just the next one I saw at the bookstore.) And, oddly enough, it’s another puzzle book like Cloud Atlas, and one that also has characters in common with that book; Luisa Rey (though, I think a different one, perhaps the later one was a namesake), Timothy Cavendish, and the comet birthmark.

Where Cloud Atlas was a series of nesting stories like a Russian doll, Ghostwritten is instead a series of stories that flow from each other without explicitly leaning on each other like a typical novel. The best comparison I can think of is the Harold; an improv technique where the individual, unrelated scenes end up dovetailing — just about every episode of the Upright Citizens Brigade TV show was a Harold. Unlike Cloud Atlas, however, each of the story/chapters ends up ending (though in at least one case, what happens at the end comes after, when you feel like it’s just left off), though, of course, the main arc continues.

The great thing about Ghostwritten, though is that with the first few chapters, you think that it’s basically a collection of short stories with an interlocking gimmick; the overall story doesn’t make itself clear until about halfway through the book. It’s a bit more subtle than in Cloud Atlas where each successive chapter has the narrator reading the previous chapter, and less likely to get a little tangled.

For example, since in Cloud Atlas Cavendish is reading the Luisa Rey chapter as part of a novel, does that mean that everything that came previous is false? However, in this novel, both Rey and Cavendish exist in the same plane… however, it appears that most of Cavendish’s published works were nonfiction, memoirs and the like, so perhaps Cavendish was mistaken when he thought Luisa’s story was a fictional one? I’d be interested to learn if David Mitchell has a series of charts that plot out the various characters amongst his books and timelines and whatnot. Perhaps once I read his other books, I’ll see if I can piece it together. From these two novels alone, I get the impression that’s what he’s working on, since both books follow that sort of interlocking puzzle box construction.

I could go on about how these two novels fit together, however if you haven’t read one or either, it’ll probably be rather useless to you. So, go out and read them! I can’t think of any higher recommendation than how much they’ve made me think about their relations to each other and how they fit together to perhaps make a full, Mitchellian universe. That’s pretty high praise if you ask me — more so than any amount of blurbs on the back. So forget what I say about WHY you should read these — just don’t forget that I say you SHOULD read them.