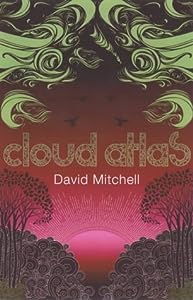 David Mitchell’s Cloud Atlas is less a novel and more a collection of six novellas. Though that’s not quite right either — the novellas are all linked and build off each other. Then again, Mitchell’s other books ALSO reference and build off each other. So, well, there you go. The main difference, however, is that David Mitchell’s other books aren’t split across each other with other characters discovering the previous narrative. At least, I hope not, as that would probably be rather difficult to read — after all, at least with Cloud Atlas you’ve got all the stories in one volume. It might be more difficult if you had to buy the other books to read one.

Enough of that, however. Cloud Atlas is rather similar to Haruki Murakami‘s work in tone — and I got a strange reminding of Neal Stephenson as well, though I’m not 100% sure on why that is. (The snide jerk in me wants to pipe up with “Yeah, Mitchell knows how to end a book!” but that’s just mean. And typically with Stephenson, his books up to the ending are good enough to make it all balance out in the end.)

One of the most interesting aspects with Cloud Atlas is that each story not only has a clearly separate authorial voice, but is a completely different genre of what went before. The first is a diary from the 1800s, the second  comprises letters (one way) from a composer (and kind of a jerk) of the 1930s. The third is a pulp eco-espionage novel taking place in the 1970s, right before Three Mile Island. The fourth is a memoir that takes place more-or-less in the present day — maybe the 1990s, but not much earlier than that. The fifth is a sci-fi novel told as an interview, and the last is a dialect-voiced far-future story that owes more to Their Eyes Were Watching God and its ilk than most sci-fi.

The truly interesting thing is that the first two are treated as real events, the next two are fictional (at least somewhat in the case of the memoir), and the last two are, again, real. A particular comet-shaped birthmark appears on a character in each story except for the memoir, where the narrator comments on how trite it is to show reincarnation so clearly marked by birthmarks or other things. It’s sort of like Todd Solondz‘ Storytelling in that it plays with what’s fiction and what’s non-fiction — at least in the world(s?) of this particular novel.

“Half-Lives”, the pulp novel, is clearly intended as fictional — there are too many convenient plot points (as the next narrator – a publisher reading the “Half-Lives” MS — mentions) and melodramatic elements (no attempt is made to color the assassin as a real character, just a sociopathic thug who thinks nothing of killing people and enjoys his work) to be presented as much more than a genre exercise. A very good genre exercise, mind you.

My favorite of the novellas is “An Orison of Sonmi-451”, the sci-fi jailhouse interview. It takes place in a not-too-distant future (later than Next Sunday, AD, though) where democracy has given way to corpocracy across the globe, and the major recurring theme of race and prejudice shows up, this time between fabricants like Sonmi-451 — service clones decanted to work in menial tasks like food service and garbage men that people don’t want to do — and purebloods, born the natural way — at least sort of; living beings are all genomed to get particular traits. I’m a bit of a sucker for this sort of story — I love the interview form in fiction, and dystopian sci-fi is one of my favorite genres; this was pretty much written expressly for me, I think.

Alternately, while “Orison” is written FOR me, Mitchell’s such a good writer that the types of fiction that typically do nothing for me (historical fiction or fiction written in a heavy dialect) are immediately engrossing. “Sloosha’s Crossin’ An’ Ev’rythin’ After” is an example of the latter. It’s initially hard to figure out the pidgin, but it’s picked up rather easily and is also one of the best stories in the book. As an aside, I found it amusing that given the form of the pidgin and the similarity of it to other books from the poor turn-of-the-century African-American dialect-written books I’ve read, that Mitchell made the pidgin-speakers white, and the more erudite types black. A nice little turn about, and a subtle commentary on one of the aforementioned recurring themes.

Cloud Atlas is initially daunting — had I not known about its nesting structure beforehand, I’m not sure I’d initially have kept with it; or at least known to keep an eye out for threads running through the various narratives. However, it’s not nearly as dense or potentially frightening as, for example, Infinite Jest by David Foster Wallace. Likewise, it’s not quite as enriching as Infinite Jest, but it doesn’t need to be, and similarly, it doesn’t mean it’s fluff. It took me a while of having Cloud Atlas sitting on my shelf after having it recommended to me to actually attempt it — and I could hardly put it down. I wished I’d started it earlier. It’s too late for me, but NOT FOR YOU! Check it out! Now!