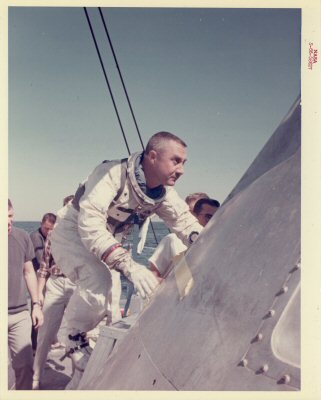 “If we die, we want people to accept it. We are in a risky business and we hope that if anything happens to us it will not delay the program. The conquest of space is worth the risk of life.” –Gus Grissom, March 1965

Lieutenant Colonel Gus Grissom suited up for the ground test of Apollo 1, a ship he had little patience for and even less hope about. As he suited up, Gus reflected upon his career in flight: he had been one of the most experienced pilots in the Army Air Force. Early in his career, during pre-flight checks, inexperienced pilots were forced to stand while only experienced pilots were allowed to sit. Gus was very proud that he had only stood up one time. He wanted to be the best of the best, and now he was: after all, he had been the second American to fly in space.

Gus painfully remembered his Mercury mission, when the hatch had blown prematurely on his spacecraft, and he had almost drowned with his ship. He was so completely embarrassed by the incident he wanted to quit NASA altogether; he wanted to be a man unassociated with failure of any sort. Even his wife was pissed at him about the hatch blowing. NASA had tried to blame him for the debacle, but later Deke, his closest buddy in the Mercury program, eventually persuaded NASA that the hatch had blown on its own volition. Gus then remembered his mission on Gemini 3 with John Young. He remembered sheepishly how John had smuggled a corned beef sandwich on the “unsinkable” Molly Brown. Their in-orbit conversation about the sandwich sort of went like this:

Grissom: What is it?
Young: (Snacking) Corned beef sandwich.
Grissom: (Exasperated) Where did that come from?
Young: I brought it with me. Let’s see how it tastes. Smells, doesn’t it?
Grissom: Yes, it’s breaking up. I’m going to stick it in my pocket.

Young: Is it?… It was a thought, anyway.
Grissom: (Nonplussed) Yep.
Young: Not a very good one.

Grissom: Pretty good, though, if it would just hold together.
Young: Want some chicken leg?
Grissom: (Shaking his head in the weightlessness) No, you can handle that.

Gus chuckled, and remembered how Deke had yelled at John for about an hour in the Astronaut Office after they had splashed down. Deke then invited Gus into his office, and they had a good laugh about the damn stupid sandwich for a good long time.

Today, the crew of Apollo 1 – Gus, Ed White, and rookie astronaut Roger Chaffee – were going to do the first “plugs out” test of the spacecraft that was meant to fly to the moon. Internally, Gus didn’t believe this spacecraft would even make it off of the launch pad, much less to the moon. The Apollo spacecraft was plagued by engineering problems, but NASA was determined more than ever to prove that the ship was capable of leaving Earth’s orbit. Everyone in NASA knew Apollo wasn’t even close to being flight ready. But Gus knew, despite his considerable trepidation, that he couldn’t let Mission Control – and, most importantly, his best friend Deke – down.

By this point, Gus had been so frustrated with the plugs-out test that he wanted to scream. When the three men entered the capsule, a nasty smell – like spoiled, curdled milk – permeated the capsule. Even worse, communications had been sporadic at best, and Gus’ words were reduced to a stern crackle. Gus sat uncomfortably next to Roger and Ed, and had no choice but to vent his anger: “How are we going to get to the moon if we can’t talk between three buildings?” Ed and Roger, who were a bit cautious about pissing off an already pissed-off Gus, both nodded submissively and replied, “Yep.”

At Mission Control, Deke nodded; even though he was vexed by Gus’ gruff impatience, he could understand his anger completely. Deke had been sidelined by NASA for years due to an innocuous heart murmur, and felt completely cheated out of getting a chance at having a Mercury mission. If any two people could understand each others’ issues with the space program, they were Gus and Deke. Deke let his mind wander a bit…maybe after the test was over he could calm Gus down with an ice cold Miller High Life and a pack of Parliaments.

Suddenly, Gus smelled smoke. Not just any smoke, but the kind of blue smoke that suggested voltages and electrical fire. His heart immediately began to race out of his chest. Oh shit…what the fuck is this? Deke? He looked at Roger, who looked equally terrified. Roger screamed, “Hey!” Gus then found himself completely enveloped by flames…Deke…Deke…please get me out of here! “FIRE!” Gus screamed through the communication loop. Gus turned his head to Ed, who frighteningly was burning up right in front of him…Ed yelled out, “Fire in the cockpit!” By now the noise of the conflagration had grown so loud, Gus knew that Mission Control couldn’t hear them, and he experienced a completely unexpected emotion, alien to him: terror.

Gus looked at Roger again, who was gasping for air; Roger screamed, “”We’ve got a bad fire! Let’s get out! We’re burning up! We’re on fire! Get us out of here!” Where was Deke? Wouldn’t Deke be able to get them out? Where are you, Deke? Gus had a flash of quick thinking: he would get on the deck so Ed could try to open up the hatch. Gus dove to the floor. Ed flew to the hatch instinctively…Deke, please come…oh shit, oh shit…but the hatch is not opening…why?…Gus realized in horror that his suit was stuck to Ed’s suit. The flames had bound them together…Deke! Then Roger then let out a scream that was the most painful thing Gus had ever heard.

Gus lay on the floor…he was now approaching the sun, floating away in his spacesuit. Suddenly he didn’t feel the fires lapping at his skin anymore. He remembered his family, his wife, Betty…he couldn’t leave her, but the sunlight was so inviting…he remembered fishing trips with Deke, in the same kind of warm Florida sunlight…Gus was back on Gemini 3, floating weightlessly towards light. He felt no pain as his breath faded away.

Deke was running faster than he ever had run in his life. He could hear Gus’ mind screaming at him…Deke! Gus…I’ve got to get my best friend out of there…he’s got a family…he’s got me…Gus, you crotchety son-of-a-bitch, you better still be alive when I get there…Deke began to think bitter irrational thoughts: NASA thinks I have a bad heart, but shit, they should see my ass running now…GUS! I’m coming to get you guys out!

Deke had made it to the launch pad. The controllers had just opened the capsule. Deke could see that it was absolutely destroyed…he could smell nothing but charred electrical wires and burned fiberglass. He heard nothing but silence. “Deke, you really don’t want to see this,” said one of the controllers tearfully. That was when Deke knew that his best friend was dead. Deke swallowed hard…Gus…what the hell am I going to tell Betty, that he died never having gone to the moon? Deke felt his eyes burn, and his nose began to run.

Deke was terrified of the controllers seeing him upset. I must keep my shit together…they can’t see what I am feeling…shit, I am the head of the Astronaut Office. “No, I think I really want to see this,” Deke said, in his most authoritative, stern voice. The controllers stepped aside, looking horrified, partly at the scene – but they were also afraid of what Deke would do next.

Deke peered inside the capsule. Gus was lying on the floor, still, looking like he was asleep. Deke hunkered down next to him…he heard no breath. Less than 10 minutes had passed since the fire. At least it was quick…at least he wasn’t in pain…what am I going to tell Betty…I lost my best friend…Gus trusted me with his life.

Deke then suddenly squared his shoulders – he was back to being the Authority Figure in Charge – and stepped briskly out of the capsule. “At least it was quick and painless…” Deke then walked back quietly to Mission Control…we want to make it to the moon…but at what price? Because I’m going to miss my best friend until the day I die.
Deke returned alone – except for his memories – to Mission Control, tears now furiously streaming down his weathered face.

“One thing that would probably have been different if Gus had lived: the first guy to walk on the moon would have been Gus Grissom….” – Donald (Deke) Slayton, 1994

“In memory of those who made the ultimate sacrifice so that others could reach for the stars.

Ad Astra Per Aspera
(A rough road leads to the stars)