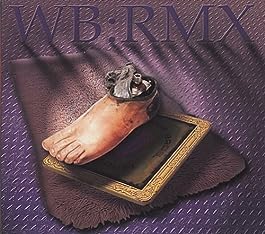 The Residents made up the existence of The Warner Brothers Album as just another piece of their mythology. They did the artwork for the reel box and maybe even threw in a blank reel, or maybe just some odds and ends on the tape. But nothing was actually ever sent to Warner Bros., or even intended to be an album, or even anything that’s supposed to be a song. They just forged the rejection letter from the A&R man. They just had a quick physical artifact so, if asked, they could go “Oh, yeah, that’s it over there. No, you can’t listen to it. We’re ashamed of that stage of our development.” Something they could let Renaldo be photographed with.

Then, later, some folks who aren’t the Residents, notice that with the advent of P2P type software, you could trade bootlegs. But, more importantly, you could trade things you claimed were bootlegs. And through special recording techniques, they record something that sounds exactly like that era of the Residents. Or, at least as something that sounds like it could be from that era, since not many people outside the Residents themselves would know what that era sounds like. And then maybe, they dump it onto a tape, and make a couple copies to get some Genuine Generation Loss on the master, rip and encode it to MP3s, and let it trade on various P2Ps. Perhaps one of them even takes a name that could conceivably be interpreted as a Cryptic’s Handle.

After hearing about everyone on various lists and whatnot talking about it, the real Residents decide to see if they find it, just to hear it and have a good laugh. And, so they do, and it turns out that they actually really like it. So they decide to download it, remix it[1], and release it as the WB:RMX CD. And they even release it to stores and everything; a real release, rather than a limited edition.

After all — who’s going to call them on it? It sounds like the Residents.
They’re anonymous, but so are the people who actually DID the recording, and
would presumably have no proof that they recorded it. The Residents could always claim the actual masters to be a fake. And besides, how would the Fakeidents know that the WBA never existed in the first place — they could always have just been remarkably good guessers/Residential Scholars to get the style and songs so dead on… and it’s not like the Residents haven’t been known to sample things…

[1]Though it is extremely difficult to remix something in mono that’s been mixed down, it is possible — David Cunningham did exactly that for The Secret Dub Life Of The Flying Lizards.

Post Script:  This is purely for amusement; the original Warner Brothers Album was broadcast, at least in part, in 1977, so it’s pretty much a given that the real thing exists.  This should not be taken as earnest speculation.